We, Class 5A, together with our English teacher, Ms. Hoodless, have adopted two corals in the Great Barrier Reef.

We have been learning about Australia in our English lessons, which included a project on the Great Barrier Reef. From this project, we learnt that the corals in the Great Barrier Reef are under immense threat from climate change. The world has already lost 30%–50% of its reefs in the last 40 years, and scientists have warned that most of the remaining reefs could be gone within decades. A global study published in October 2021 found that about 14% of the world's corals died between 2009 and 2018, primarily due to rising temperatures.

This led let us to ask: what can we do to help? During our research, we found a charity called the Reef Restoration Foundation, whose mission is to help restore the corals in the Great Barrier Reef. By adopting a coral, we can help them achieve their goal of preserving the Reef for future generations. So, we decided to adopt two!

Our adopted corals are taken as cuttings from bigger corals in the Reef that have survived bleaching events. They are taken to a nearby coral nursery, where they spend 6-12 months growing and regenerating before being taken back to the Reef.

We thought it would be nice to contact the charity, to tell them about our adoption so two of us wrote to them on Instagram. They wrote back, thanking us for helping them and the Reef and have also sent us some materials to use in class. We have received a certificate of adoption, and will periodically be updated about how our corals are doing!

We have called our corals Timon and Pumbaa – two best friends in The Lion King, who remind us to always stick together and hakuna matata! 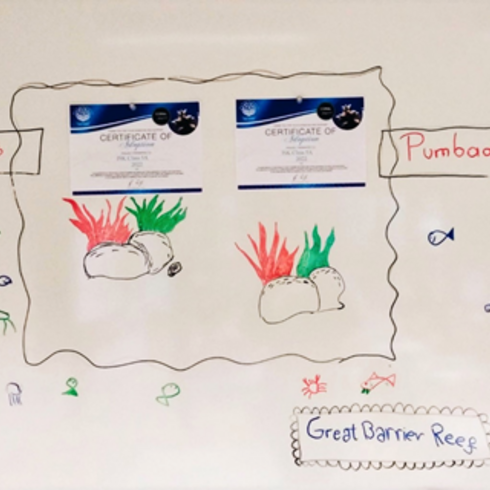