With his pre-scientific thesis on the Mpemba effect, ISK graduate Roman Eder has won two coveted prizes: the Dr. Hans Riegel Prize of the University of Innsbruck and the VWA Prize of the Austrian Physical Society.

The thesis, written entirely in English, investigates the puzzling characteristic of water, which freezes faster if it has been heated beforehand. Although this effect was already known in antiquity and early modern times, it was forgotten for a long time and was only rediscovered in 1969 by the Tanzanian student Erasto Mpemba.

Roman Eder gets to the bottom of this phenomenon with clever experiments and in-depth literature research and is convincing all along the line.

His physics teacher and supervisor of the pre-scientific work, Klaus Reitberger, comments: "You probably only get a student with so much talent and intellect once in a teacher's life. This work is hardly distinguishable from a scientific publication at university level and now achieves deserved appreciation. I wish Roman good luck for the future. I was allowed to teach him for four years. It was an honour!" 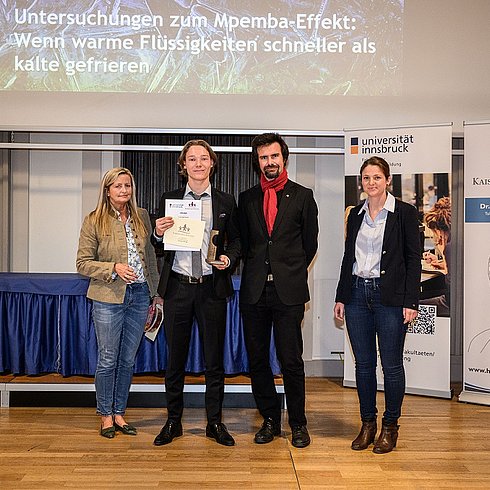